The Emblem of the Association: 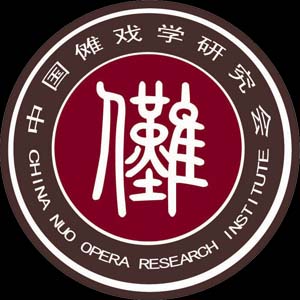 In the Center, the character “Nuo” (exorcism festival) designates the research focus of the Association. The Zhuan-style calligraphy symbolizes the long history of Nuo culture in China.

In the outer circle, the full name of the Association appears, with the upper half in Chinese, the lower half in English.

The circular shape symbolizes the unity of all involved in the study of Nuo culture both in China and overseas.

The dark red color symbolizes the land of China and Nuo culture, which are equally ancient and profound. 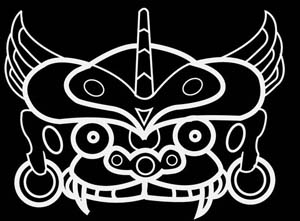 The design of a mask in the shape of a flat square, with two wings on the head, two eyes in concurrent circles, is the symbol of the “divine emblem” (the sun and the bird) for the Hemudu Culture and Liangzhu Culture.
The design of a mask inside a flat square, with a pair of wings and two eyes in concurrent circles, is a “divine emblem” (representing the sun and a bird) for Hemudu and Liangzhu cultures.

The staring eyes and ferocious fangs represent the mask of the mystical monster Taotie in Longshan culture and in the Zhou and Qin dynasties.

The seven stars on the face represent Zhong Kui, the demon queller.

The single horn on the forehead represents Xie Chai (the divine unicorn that wards off evil forces) during the Zhou and Qin dynasties.